Over the last couple of weeks, I have had the privilege of testing out two of Corsair ‘s FPS/MOBA gaming mouses. The first is the Nightsword RGB, which is a tunable, high performance gaming mouse. Its headline feature is a customizable weight system, with six weights that you can tuck in at the bottom. Fill all six holes, and your mouse will weigh in at a fairly hefty 141 grams. Not that it was light to begin with. Without the weights it still weighs in at 119 grams, and at 5.1 inches long, 3.4 inches wide and 1.7 inches high, it also feels quite bulky. By comparison, the other mouse I was reviewing, the Ironclaw RGB, weighs in at just 105 grams. 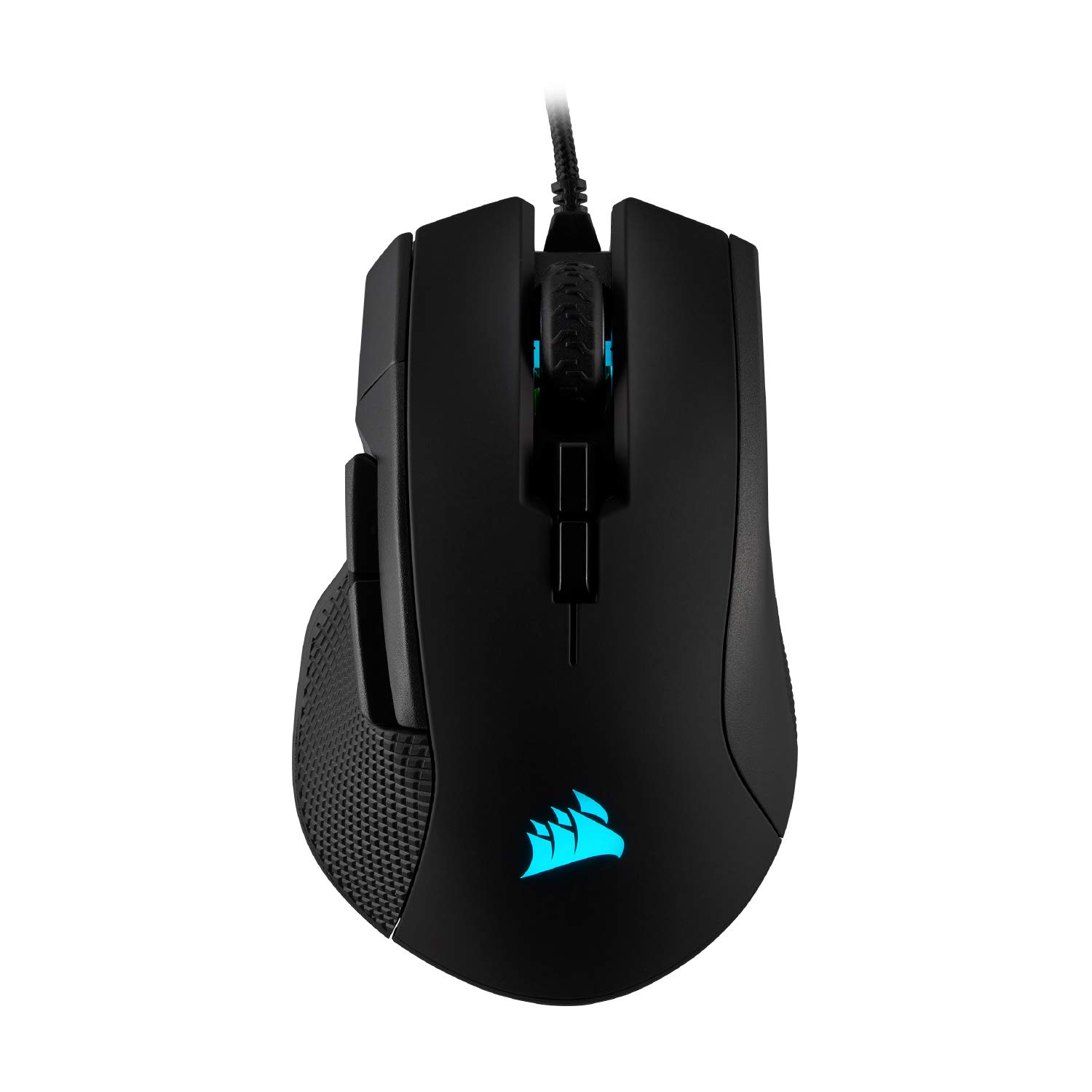 Personally, I prefer a bulkier mouse for everyday use, but for FPS games it feels a bit sluggish. There is also something just a little off with the frame. I can’t exactly put my finger(s) on it…but maybe that’s just it. Even though the rubbery grips are comfortable, and I love the extended thumb rest, the positioning of the ring and pinky fingers are a bit off. Gamers with larger hands might find these fingers dangling awkwardly. On the other hand, the Ironclaw is more forgiving in this regard.  The only thing that bothered me was the thumb rest. Once I got used to the Nightsword‘s overly extended thumb rest, I oddly didn’t know what to do with my thumb once I moved over to the Ironclaw. 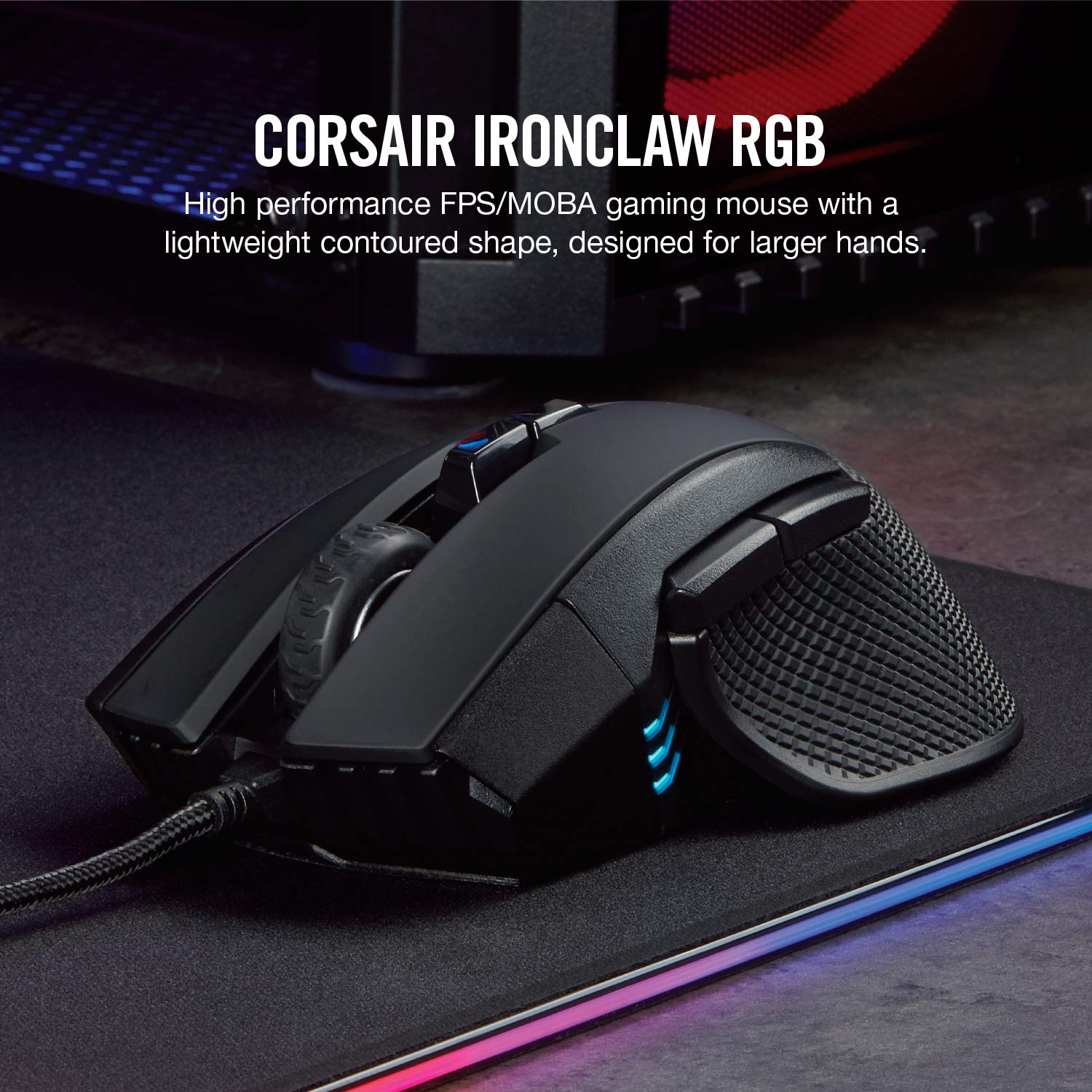 Don’t get me wrong, the Ironclaw is a well designed mouse. Measuring in at 5.1 inches long, 3.2 inches wide and 1.8 inches high, it is a big and comfortable mouse. The left and right mouse buttons are concavely shaped to keep your fingers in their correct positions. The scroll-wheel is wide and rubbery with a grippy texture. Behind the scroll wheel are two buttons for cycling through profiles and adjusting the DPI. Speaking of which, the DPI weighs in at a whopping 18 000 DPI. There are also two buttons on the side that are set by default to the forward and back functions. All seven buttons are programmable through Corsair’s iCUE management software. My review unit’s scroll-wheel was slightly sticky, but this could just be the specific unit I was issued. The only real complaint I have with the button layout is that the forward and back button protrude a little too far. I would’ve preferred them to be flush. 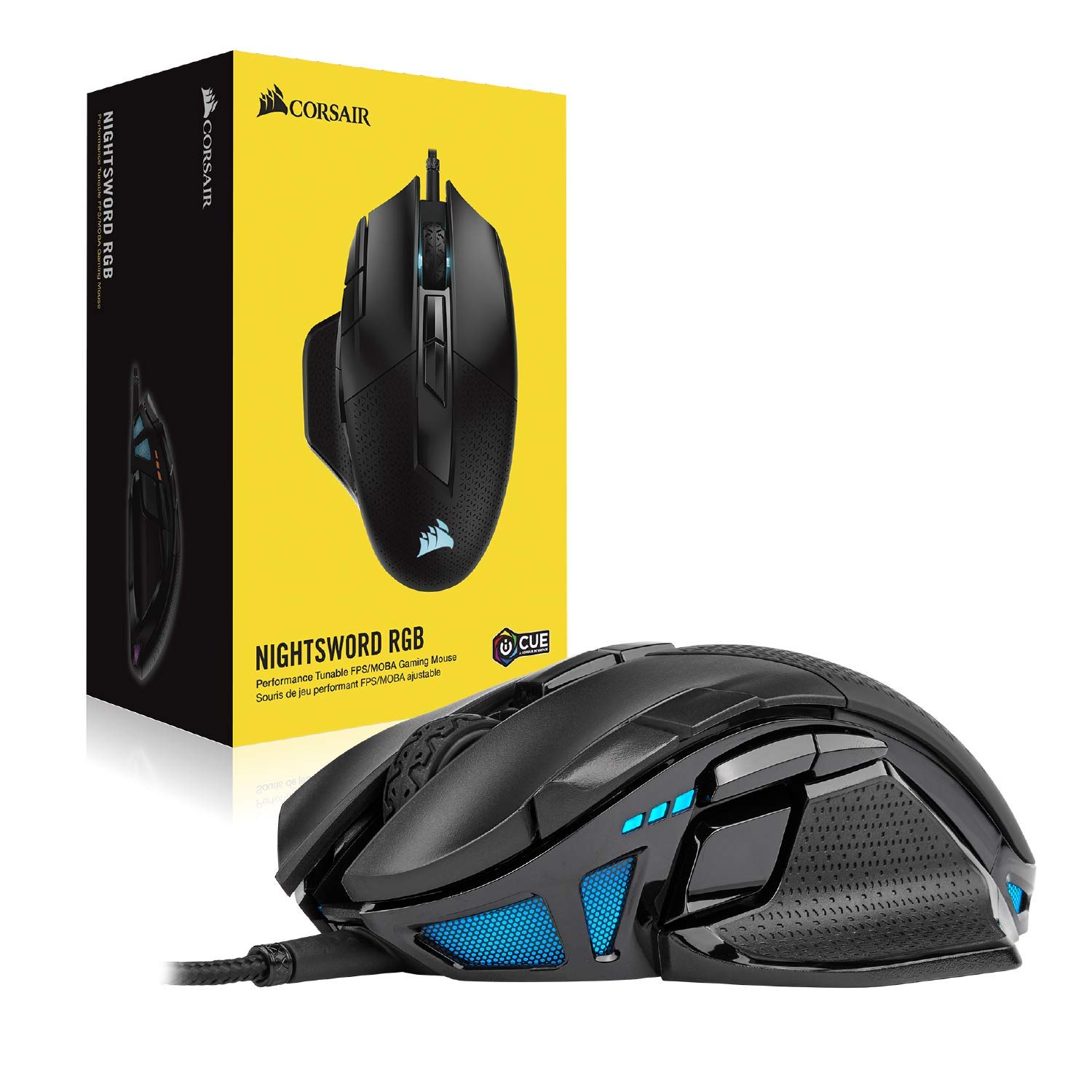 The Nightsword has ten fully programmable buttons, seven on the top surface and three on the left side.  On the top you’ll find your typical left and right mouse buttons and a clickable scroll-wheel. There are also two pairs of buttons to cycle through the user created profiles and to change the DPI settings, with the maximum also being 18 000. On the left side are forward and back buttons and a sniper button, which lowers the DPI setting when it’s held down. While the array of buttons are quite useful to have in your arsenal, their positioning can be improved. Pressing the sniper button requires an uncomfortable thumb stretch, and the DPI buttons next to the scroll-wheel requires a change in your grip before they can be pushed. 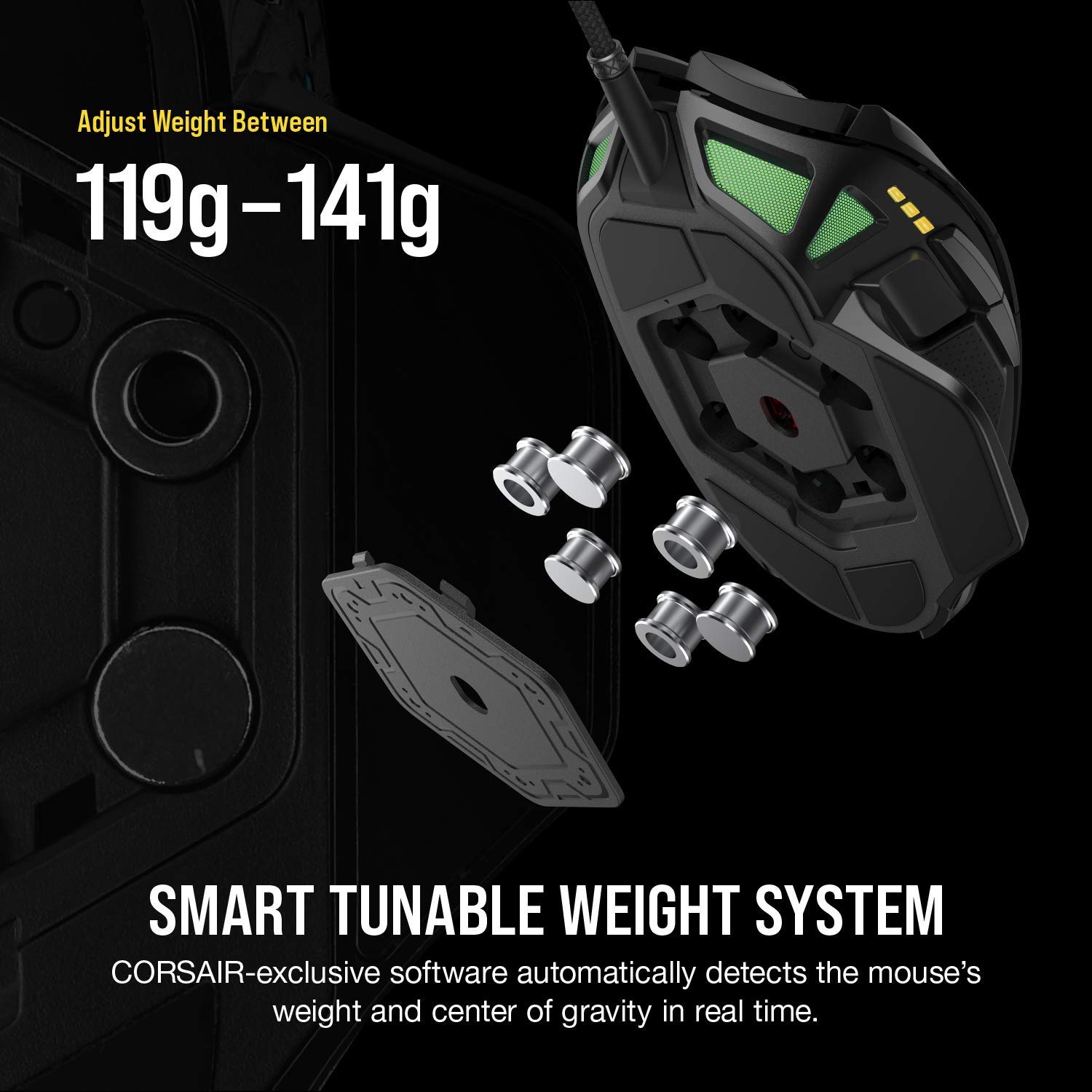 Both mouses have the “RGB” moniker, and while it adds a certain amount of flair, it also provides a function. As per usual, the area surrounding the scroll-wheel and the manufacturer’s logo lights up. On top of this, the Ironclaw also has an area on the left side in front of the thumb to indicate the DPI setting and the profile selected. The Nightsword boasts these same lighting zones, but also has cutouts in the front and rear to illuminate the colour of your choosing. The iCUE software allows for an impressive array of lighting effects, including indicating CPU or GPU temperature, mode selected, and custom colours. 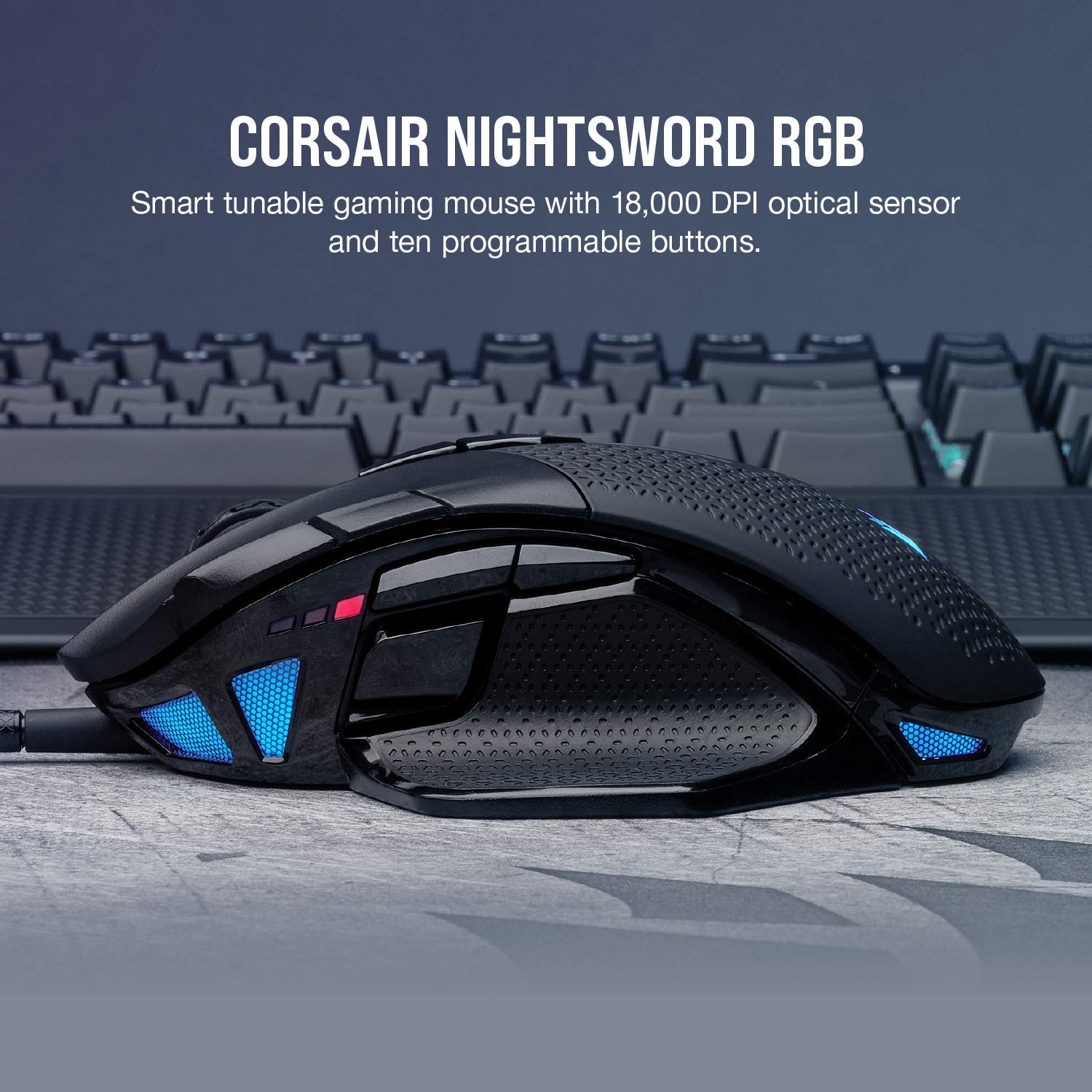 Equally impressive is the fact the the software can detect the weights you’ve added to the Nightsword. It even goes as far as to calculate the total mass and how the center of its mass is affected along the X, Y and Z axis. While the nerd in me freaks out about this functionality, I can’t help to wonder about the real-world applicability. Maybe it’s just me, but I don’t foresee playing around with the weight distribution on a regular basis. Granted, improving the weight could be useful when playing a MOBA or strategy game, but it in general I will probably just set it up initially and then leave it. 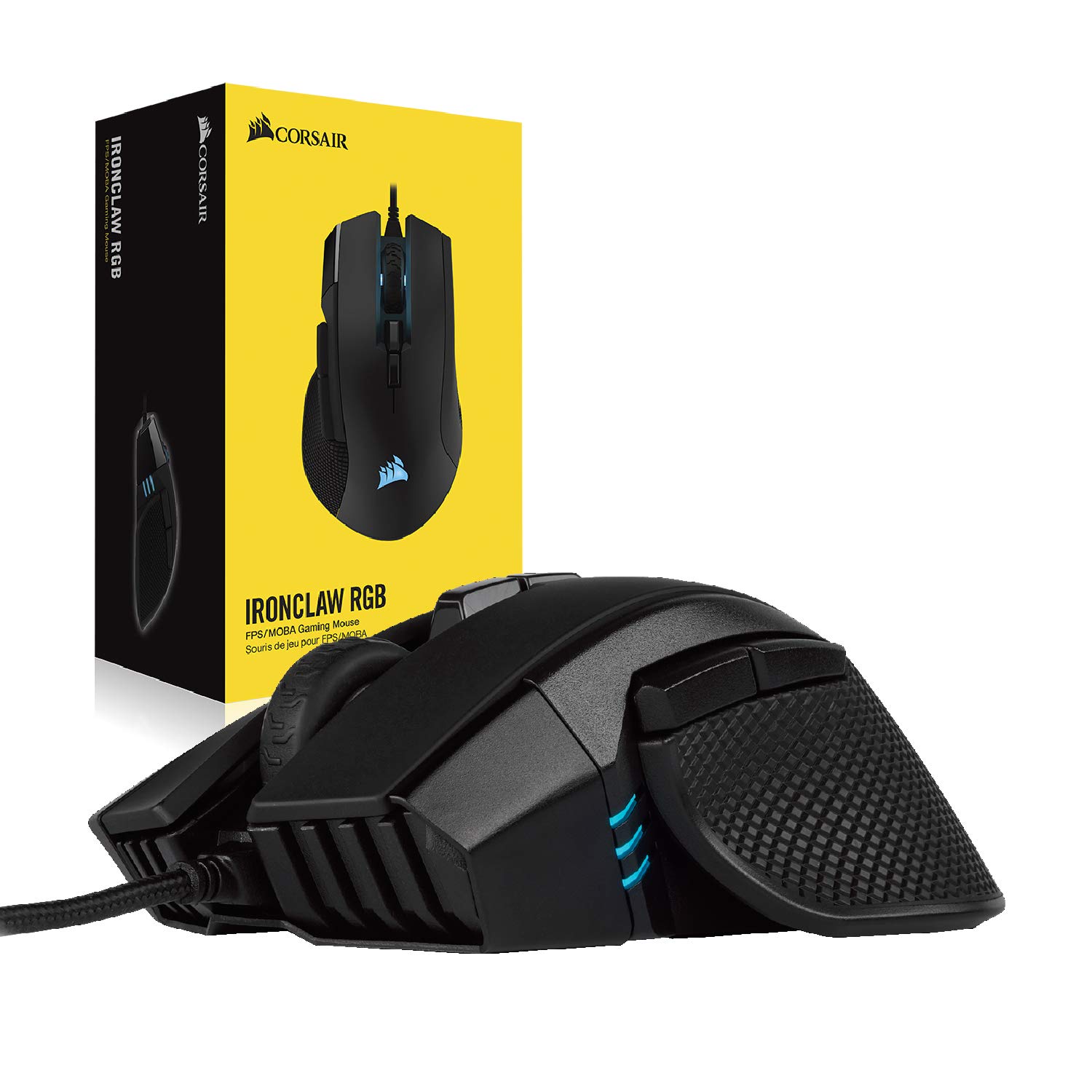 In terms of cost, both mouses are on the slightly expensive side. The lowest price I could find on the Ironclaw is around R840 (or $57 on Amazon), and the Nightsword weighs in around R1700 (or $80 on Amazon). Neither is perfect, but none of the flaws are real deal-breakers. In the end, it all boils down to affordability and customization. If you are one of those people that constantly tinkers until you have the perfect setup or configuration, the Nightsword is certainly the better choice. If this doesn’t matter, or if cost is a major issue, the Ironclaw provides excellent performance out of the box. Also, it depends on your preferred game type. The lighter weight of the Ironclaw might provide you with the necessary edge in an FPS, whereas the extra buttons on the Nightsword could come in handy for a MOBA or strategy game. Personally, I prefer the Nightsword for its weight customization. Even though I seriously doubt that I will constantly tinker with the distribution, I find the option alluring. Also the extra RGB lighting zones! Yeah, I’m a sucker like that. Both mice are 8/10 in my books and well worth purchasing depending on your preferred gaming style.

The lighter weight of the Ironclaw might provide you with the necessary edge in an FPS, whereas the extra buttons on the Nightsword could come in handy for a MOBA or strategy game. Check out our comparison review